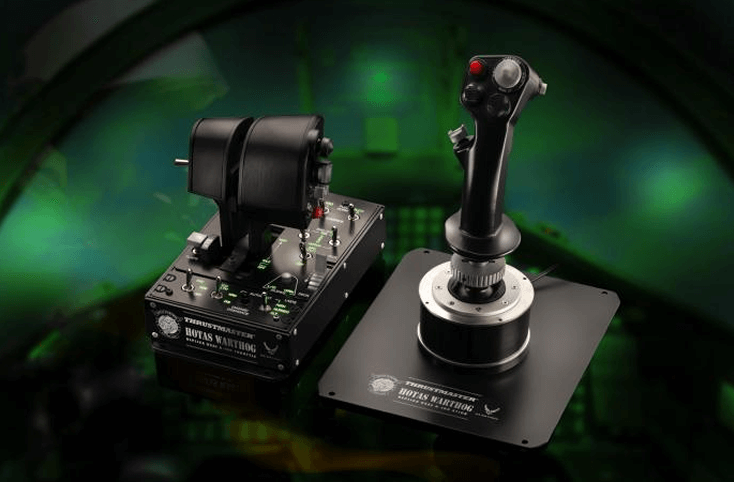 A joystick is the ideal controller for when you like to fly helicopters or for combat flight simulators, such as Digital Combat Simulator (DCS) or IL-2. With a stick you have your hands on more precise controls than with, for instance, a keyboard and mouse. Moreover, it's a lot more realistic.

A joystick is the ideal controller for when you like to fly helicopters or for combat flight simulators, such as Digital Combat Simulator (DCS) or IL-2. With a stick you have your hands on more precise controls than with, for instance, a keyboard and mouse. Moreover, it's a lot more realistic.

When you are planning to buy a joystick and google for 'best joystick', you quickly find yourself on flightsim forums or on websites where other people are asking the same question.
To help answer your question, we have compiled a top-5 of joysticks that are available on our website. Scroll to the bottom of the article for an explanation of the points we have taken into consideration for our top five list.

It is important, when you want to buy a joystick, to take the four points below into consideration. These points are the base of our Top 5 Flight Simulator Joysticks.

If you have a windows system, there are plenty of joysticks to choose from. Pretty much every joystick has drivers or software which is suitable for this platform.
It gets a lot more complicated when you fly or play games on a Mac. More often than not, there are no drivers or additional software available. This doesn't mean that the joystick isn't working, but you can't, for instance, use the displays or variable background lighting of a stick. Also, there often is no mapping software available.

Some joysticks also work on consoles. If you also have a playstation or an xbox, these joysticks are certainly worth considering when buying a new stick.

With a joystick (or joystick and throttle, or maybe even two joysticks) in your hand(s), of course you prefer to have your most used actions withing reach. Especially when you don't have time to find the hotkey on your keyboard, for instance during a dogfight.
For that reason, it is important that you have enough buttons on your set so you can take action quickly when you need to.

In the previous paragraph we already mentioned the term 'throttle'. A throttle is used to control the thrust of your airplane. Often, a throttle is present in the form of a slider on the stick but some joysticks have a separate throttle. This combination of joystick and throttle, where you fly with one hand on the throttle and on your stick, is called HOTAS (Hands On Throttle And Stick).

Apart from an x-axis and a y-axis, a number of joysticks also have a z-axis. The z-axis is controlled by turning the stick to the left and to the right (twisting) and can be used to control the rudder.
When a joystick does not have a stick twist, it is common to use rudder pedals for this function. Rudder pedals provide a more realistic approach and can also be used when your stick does have a twist function.

Make your own choice?

Would you like to check out all joysticks, including the ones that aren't listed here? You can on ourFlight Simulator Joysticks page. There, you can also create a filter for all the functions you find important.

There are no comments yet, be the first one to comment

Thousands of virtual pilots stay informed about flightsim news, product releases and events through our newsletter.